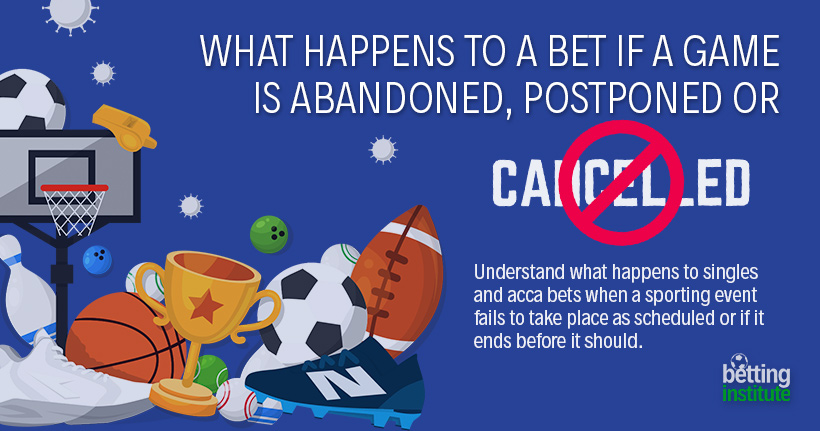 What Happens to a Bet if a Game is Abandoned, Postponed or Cancelled

No punter likes to see that the matches they’ve wagered on were postponed, cancelled or interrupted. However, on rare occasions, they can luckily avoid losing a bet and benefit from the apparently annoying situation.

What’s important to know from the beginning is that different betting sites have different rules for the same occurrences. And even though there are plenty of reasons why a game could be suspended, postponed or cancelled (weather, injury, illness, death, crowd trouble, security concerns etc.), there are rules that cover every scenario that can occur in almost every sport.

Sports betting has plummeted in spring 2020 as numerous sporting events have been cancelled or postponed because of the disruption caused by the pandemic. Even major competitions like Euro 2020 and the 2020 Summer Olympics were rescheduled to 2021.

Therefore, the way bookies address postponed and abandoned events has become of great interest for punters worldwide. So, we thought it would be a good idea to shed some light on this matter, and that's precisely what you're going to find below.

Quickly navigate to your desired topic: 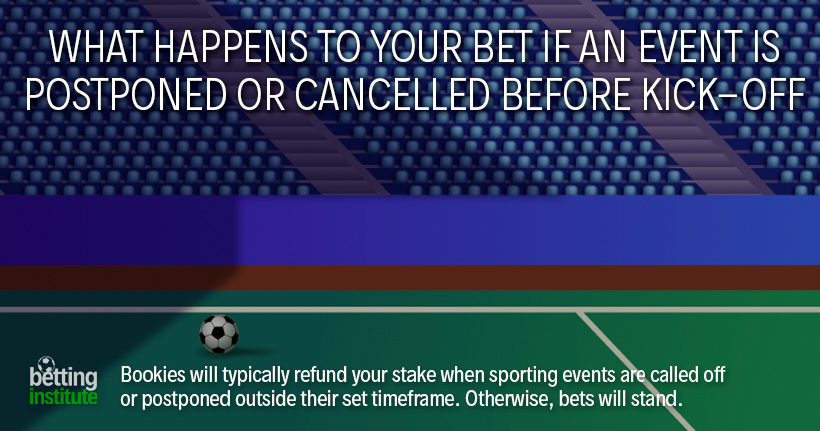 Bookies will typically refund your stake when sporting events are called off or postponed more than 24, 48 or 72 hours from the original kick-off time. The bets will be allowed to stand if the event is rescheduled within the set timeframe.

Next, we’re going to list a few examples of postponed and cancellation policies.

Postponed or cancelled football match at Bet365: The bet will stand only it is played within the same week (ending on Sunday) after the game has been postponed. If a match is rescheduled from the weekend to a Monday due to TV coverage, the bet will stand as well. In all other cases, bets will be void.

Postponed tennis match: In the event of any of the following circumstances, all bets will stand:

Cancelled tennis match at Bet365: All bets are refunded.

Feel free to check out our tennis betting guide if you want to learn more about the essential tennis rules concerning injuries, disqualifications and abandoned matches.

Postponed or cancelled horse race at Bet365: If a race is postponed or rescheduled, either to later in the day or to another day and final declarations stand then bets stand.

If a race is postponed or rescheduled, either to later in the day or to another day and final declarations stand then bets stand.

However, single bets on horse racing will be made void, and any selection involved in accumulative bets will be treated as a non-runner if:

If a match venue is changed then bets already placed will stand providing the home team is still designated as such. If the home and away team for a listed match are reversed, then bets placed based on the original listing will be void.

Players Sent Off/Retired Out: For settlement purposes, in the event of a player being Sent Off/Retired Out (any player permanently removed from the remainder of the match by an Umpire), will be considered a standard fall of wicket in relation to all Wicket / Batsman / Method markets.

In the event of a player being removed from the match for a specified duration and allowed to return, then this will be considered Retired Not Out and no fall of wicket in relation to all Wicket / Batsman / Method markets.

Batsman Matches: Note that in test and county championship matches only the first innings counts. Bets will stand after batsman has faced one ball or is given out before first ball is faced. In the event of two or more players ending on an equal number of runs then bets void.

Batsman Match Runs: Bets will stand after batsman has faced one ball or is given out before first ball is faced. Score counts if batsman is Not-Out including if innings is declared. The following minimum number of overs must be scheduled, and there must be an official result (Duckworth-Lewis counts) otherwise all bets are void unless settlement of bets is already determined:

Please remember that the exact bet settlement criteria will vary from sport to sport and between bookmakers. So, check out your bookie’s bet cancellation policy to know what to expect.

Looking for the best odds on Premier League football? Sign up with this bookie and see for yourself! 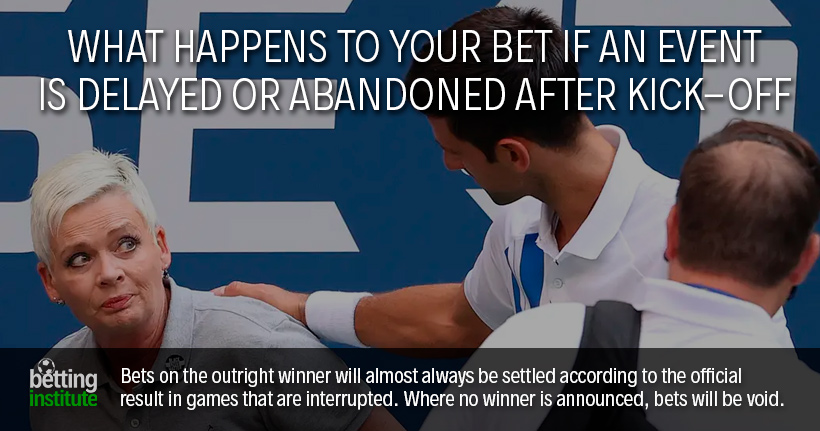 Bets on the outright winner will almost always be settled according to the official result in games that are interrupted. Where no winner is announced, bets will invariably be void.

Bets are more likely to stand in cricket or tennis matches when compared to football, where an abandoned event will lead to a void bet in most cases.

Next, we’re going to list a few examples of delayed and abandoned bet policies.

Abandoned football bets at Bet365: When a football match is abandoned determined bets are settled, e.g. first player to score or time of the first goal bets will stand provided a goal has been scored at the time of abandonment, and undetermined bets are made void.

The only exception to the above abandoned match rule, is for all South American club matches where Full-Time Result and Double Chance markets (both pre-game and In-Play) will be settled on the score at the time of the abandonment providing the relevant league allows the result to stand.

Abandoned tennis match at Bet365: In the event of a match starting but not being completed then all bets will be void unless after the start of the match a player is disqualified in which case the player/team progressing to the next round or being awarded the victory will be deemed the winner for settlement purposes.

In-Play Batsman Runs cricket bets at Bet365: Over/Under runs bets will stand after batsman has faced one ball or is given out before first ball is faced. Score counts if batsman is Not-Out including if innings is declared.

In matches of 10 overs or less, bets will be void if the entire innings is not completed, unless settlement of bets is already determined.

Is live betting your game? Come and play right now: the No. 1 in-play betting bookmaker awaits you! 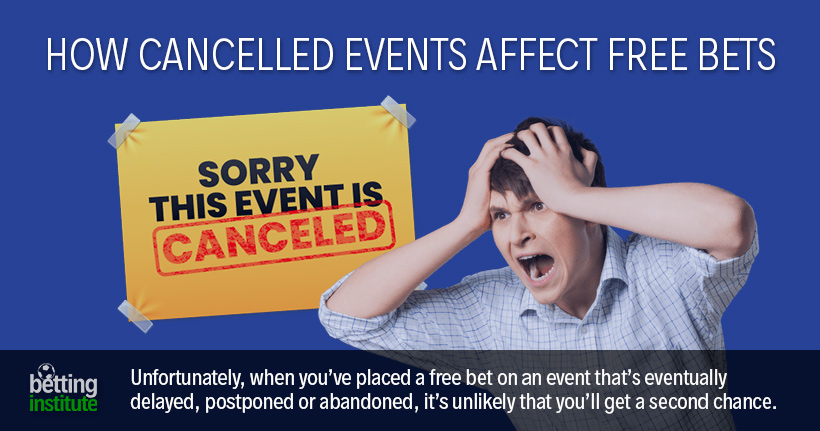 Unfortunately, when you’ve placed a qualifying bet or a free bet on an event that’s eventually delayed, postponed or abandoned, it’s unlikely that you’ll get a second chance – irrespective if it was voided in an accumulator or as a single bet.

Anyhow, what happens to betting bonuses when a bet has been cancelled is stated in the bookie’s free bet terms and conditions. But there’s no reason why you shouldn’t contact customer support if you end up in such an unfortunate situation, as you may be eligible for some sort of compensation.

Yet, when it comes to other betting promotions such as deposit bonuses, the only downside with voided bets is that the stake won’t count towards the rollover, but you shouldn’t lose bonus credits; the same principles apply with cashed-out bets. Exceptions may exist though. But again, the rules on how voided bets affect free bets differ from one bookmaker to another.

All in all, the easiest way to get an accurate answer regarding what happens to your bet on a game that is postponed or abandoned is to get in touch with the bookmaker’s customer service team.

What Happens to a Bet if a Game is Abandoned, Postponed or…