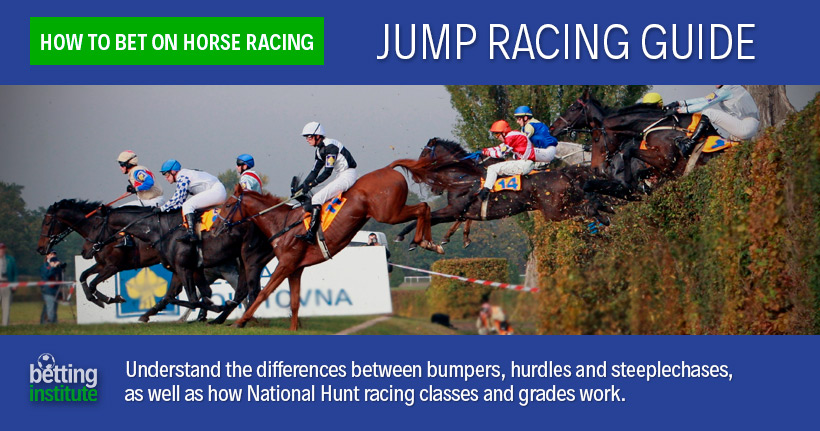 Understand the differences between bumpers, hurdles and steeplechases, as well as how National Hunt racing classes and grades work

Races where horses have to jump hurdles, fences and ditches fall under the National Hunt racing classification. However, beginners tend to start in the Bumper category. These are essentially flat horse races. After they get used to competing, they can advance to Hurdles – an intermediate level where races feature a minimum of eight intervening jumps. Ultimately, the best horses enter Steeplechase events, where the jumps are significantly more demanding.

Jump races are run over much longer distances, so they are suited to horses that excel at endurance. As stamina plays a vital role in this type of race, the competing horses tend to be older than those used in Flat Racing. Also, horses used in National Hunt racing have little or no breeding value, so they are usually raced well into adulthood.

The National Hunt season runs over the winter when the ground is softer and therefore most convenient for jumping.

Jump racehorses typically start racing at three or four years old, and peak between the ages of 7 and 10. This longevity creates rivalries, as well as stronger bonds between racing fans and horses.

Unlike in Flat Racing, where the runners begin their races from starting stalls, a tape is used to start National Hunt races. This method is used because racetracks usually lack width at the start, and the ground would often be too soft to move the stalls around in line with the race day programs.

Punters are captivated by jump races not because they represent a thrilling spectacle – with horses having to clear several obstacles over large distances, – but because they are more unpredictable, thus providing a high level of value betting opportunities.

As with Flat racing, Jump races are graded according to their importance, with Class 1 attracting the best horses, jockeys and trainers. In this guide to betting on jump races, we’re going to go into further detail about the classes, presenting the grades and the many types of races that take place during the National Hunt season.

Wait no more! You can start wagering with the best bookmaker in the UK in less than 2 minutes!

Quickly navigate to your desired topic: 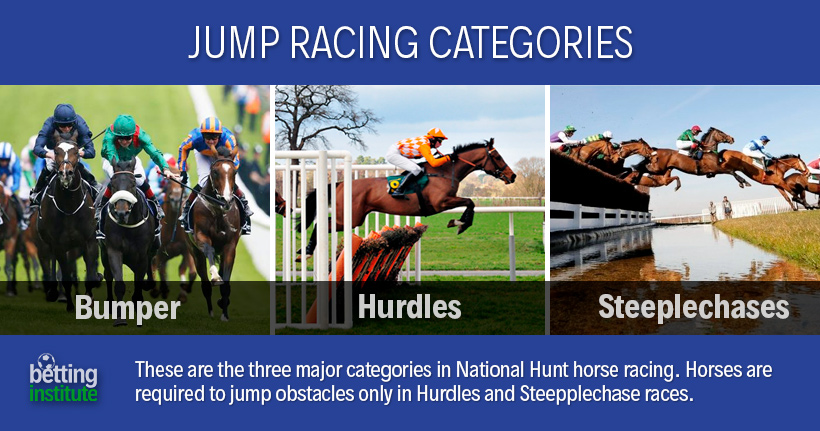 There are three major categories in UK National Hunt horse racing. In Chase and Hurdle races, horses are required to jump obstacles, whereas Bumper races are flat races.

Bumper – These low-class races are designed to give young horses and novice jockeys the chance to get familiar with racing, before moving on to actual jump races. The National Hunt flat race tracks have no obstacles. Still, these races are generally run over longer distances (between 1.5 and 2.5 miles) when compared to competitions that take place in the Flat Racing season. Bumper races typically take place at the end of the race card, and they are probably the hardest to predict.

Champion Bumper, the most prestigious Bumper race of the season, is run on the Old Course at Cheltenham.

Hurdles – Although competitors could skip Hurdles and participate in Chase races, this is an intermediary class where the horses are required to jump obstacles. Hurdle Races are usually run over a distance of two miles to three and a half miles. As opposed to the fences and hurdles used in Steeplechases, the obstacles in hurdles races are flexible at the top, and also shorter: the minimum height of a hurdle is 3 feet 6 inches. Therefore, racing is this category is both safer and faster than Steeple Chases.

The Champion Hurdle, the World Hurdle (both held at Cheltenham), and the Christmas Hurdle (Kempton Park) are the most iconic hurdles horse races in the UK.

Steeplechases – This is the oldest and most famous form of Jump Racing. In its early days' horses in Ireland would race over natural obstacles from one church steeple to the next. Nowadays, they are held in race tracks that have three types of obstacles:

A Steeple Chase tends to be run over distances from two miles to four and a half miles. 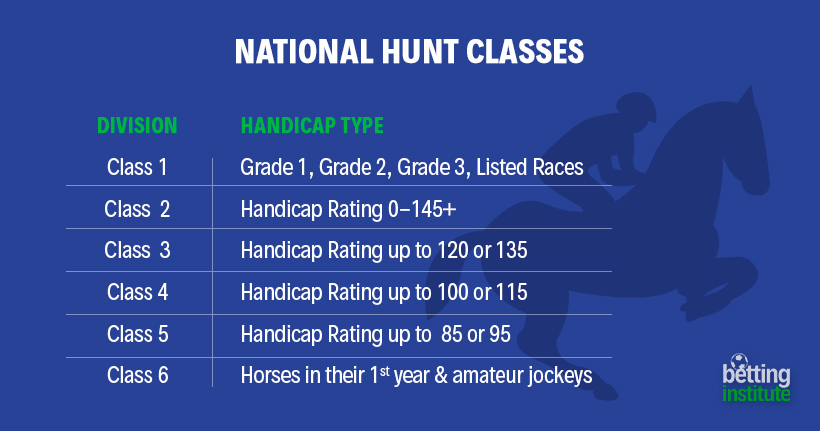 The Class system used for National Hunt season is meant to enable jump horses race against others of similar ability. The British Horse Racing Authority appoints handicappers that assign an Official Rating to every horse, which is essentially a weight they will have to carry in every handicap event –  handicaps are the most common types of flat races in Great Britain & Ireland.

Jump Races are divided into 6 classes, with the first-class being sub-divided further, as follows:

Unlike Flat Racing, lower Class races do not carry minimum rating restrictions. Consequently, horses can enter races in classes 2 through 6 based on their maximum handicap rating.

‘Stayers' are horses that run best over distances of more than a mile and a half. They may lack the ability to speed up, but they can run with a degree of stamina that makes them jumpers to follow in races such as the Stayers’ Hurdle at the Cheltenham Festival. 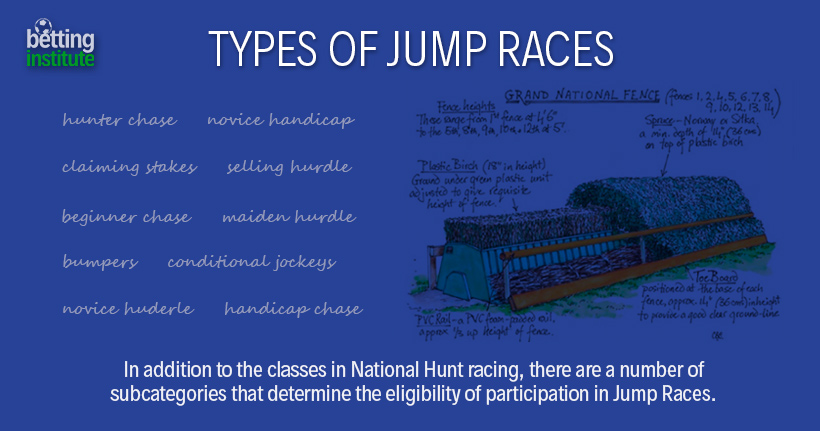 In addition to the classes in National Hunt racing, several sub-categories determine the eligibility of participation. These are the types of Jump Races available among classes 2 and 6:

We hope you’ve learned a thing or two from our guide to the jumps. It’s now up to you to figure out what horses to follow, check out jump season stats on the Racing Post guide, and spend a day at the races to get a glimpse of the action.

If you want to learn more about horse racing betting refer to our other guide that explains all the basic stuff like the differences between Flat Racing and National Hunt racing, how Starting Price (SP) works, what Best Odds Guaranteed (BOG) means, and some horse racing tips for beginners. You'll even find all the bet types explained: each-way bets, forecast bets, trixie bet, tricast betting etc.

How To Bet On Horse Racing

How To Bet On Horse Racing